University of Botswana through the Department of Sociology hosted the 1st RC33 Regional Conference: Africa – Botswana from the 23rd to the 25th of September 2021 online. The conference was organized in partnership with Technical University of Berlin and in cooperation with the Research Committee on “Logic and Methodology in Sociology” (RC33) and the Research Network “Quantitative Methods “(RN21) of the European Sociology Association” (ESA). The main aim of the conference was to create a global network of discourse on social science methodology that will integrate scholars from the Global South and the Global North. SMUS Conference Botswana was the first of the many conferences that will be hosted by RC33 in cooperation with ESA RN21 “Quantitative Methods” and it was made possible by funding from the German Federal Ministry for Economic Cooperation and Development (BMZ) via the German Academic Exchange Service (DAAD). RC33 in cooperation with ESA RN21 “Quantitative Methods” will host yet another anticipated conference, The 2nd International and Interdisciplinary Conference on Spatial Methods and 2nd RC33 Regional Conference-South America: Brazil, which will take place in Brazil from the 8th to the 10th of September 2022. More details on the conference will be announced on the official RC33 website and Newsletter as while as the GCSMUS website.

The conference commenced with a “Call for Sessions” followed by a “Call for Abstracts” with the objective of appealing to scholars to submit papers that presented a methodological problem to sessions of interest from different fields of study, particularly spatial and social sciences. Combining methodologies from social and spatial fields to accelerate the SDG 11 goal of promoting sustainable cities and communities was one of the primary goals of SMUS Conference Botswana. A total of 132 abstracts which met the set acceptance requirements were submitted to 25 various sessions by postgraduate students, early career researchers, advanced researchers, and experts from various disciplines and geographical areas. In terms of conference participation, a total of 639 participants registered to attend the conference representing 40 countries from all continents.

Botswana’s Acting Minister of Tertiary Education, Research, Science and Technology, Honourable Machana Shamukuni, officially opened the conference and commended the partnership between University of Botswana and Technical University of Berlin, stating that it is through collaborations such as these that countries can engage in transformative knowledge production for development of societies. Also present during the opening ceremony of the 1st RC33 Regional Conference: Africa – Botswana was the University of Botswana Vice Chancellor, Professor David Norris, and Her Excellency Margit Hellwig-Bötte, Ambassador of the Federal Republic of Germany to Botswana. When given the opportunity to address conference attendees, Her Excellency Margit Hellwig-Bötte and Professor Norris both expressed the importance of networking and forming long-lasting fruitful collaborations during events such as this one. German Ambassador to Botswana extolled the initiatives of the 1st RC33 Regional Conference: Africa – Botswana saying, “The conference is a good example that shows that the Global North and the Global South can learn from each other and benefit from the knowledge exchange”. While Professor Norris noted that this cooperation is the gateway to facilitating knowledge exchange among scholars from all over the world and therefore should be highly applauded.

Amongst the captivating event of the conference was the keynote addresses from renowned scholars representing the African and European continent respectively. Professor Dr. Sabelo Ndlovu-Gatsheni, a Social Scientist and Chair of Epistemologies of the Global South with emphasis on Africa from the University of Bayreuth in Germany delivered an address titled “Decolonization as Method”. In his address, Prof. Ndlovu-Gatsheni urged those interested in “decolonization” to view it as a method that must be understood as a long standing epistemic political and ethical intellectual movement made of several school of thoughts.

Representing the African continent and hailed as an African thought leader driving the concept of “African-rooted evaluation”, Professor Bagele Chilisa from the University of Botswana delivered a keynote on Indigenous Research Methods and Spatial Methods in Africa in which she highlighted a summary of her ground shifting research methodology book called Indigenous Research Methodologies. Assoc. Prof. Dr. Wolfgang Aschauer an expert in cross-national surveys and quantitative research methods, gave a keynote speech on Quantitative Cross-Cultural Research which sparked much needed conversation around the diverse perspective of cultures that exists within different geographical groupings and how surveys can be used to analyse them.

Prof. Wolfgang Aschauer also proposed that new units be sought out emphasizing on intra-regional local dynamics assessing different cultures in growing multi-cultural societies. Another renowned German Sociologist recognized internationally for introducing the Method of Biographical Case Reconstruction using Biographical Narrative Interviews, Prof. Dr. Gabriele Rosenthal honoured the invitation to deliver a keynote on Biographical Research in Africa. She highlighted that understanding the whole story in biographical narrative interview is crucial, therefore an interviewer should find ways of getting people (interviewees) to tell their story in their own way in order to make pertinent conclusions. 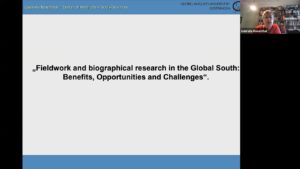 Since the conclusion of the conference, SMUS Botswana organizing team received endless congratulatory messages on a well-organized conference. Mr Emmanuel Maravanyika at the University of Botswana who followed the conference online congratulated the organizing team stating that the conference was very great, and it will be talked about for some time to come. Professor Edlyne Anugwom from the University of Nigeria sent a congratulatory message via email saying “This is to say congrats for a superbly organised conference, the fact that it was virtual makes your feat even more laudable and worth celebrating by all good intentioned Africans. At least for this to happen in Africa means that the call for decolonization is backed by capacity from the global South. You have shown true academic leadership!”. One of the session organizers during the conference, Barbarino, Robert from TU Dortmund University thanked SMUS organizing team for organizing the conference, noting that it was a very enriching academic event. It goes without saying that SMUS Conference Botswana was indeed a much-needed platform that stimulated interaction of scholars and methodologists from various disciplines around the world. Those who attended the conference online attested to this in celebration, reporting that it was exactly what they needed, especially since Covid -19 robbed them of meaningful and intellectual engagement with others.

The “1st International and Interdisciplinary Conference on Spatial Methods” (SMUS Conference) and “1st RC33 Regional Conference – Africa: Botswana” in cooperation with ESA RN21 “Quantitative Methods” was held from the 23rd to 25th September 2021.